The Story Behind #BSNFeeling – The 2017 Performing Arts Week Video 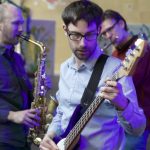 After the success of last year’s All You Need is Love video (created in order to raise money for Save the Children) by Junior School Vlaskamp, we decided to get even more ambitious and create a whole school music video in order to raise money for Unicef, incorporating all 4 BSN sites and reflecting the range of students and staff at the BSN. We shortlisted a number of songs until we decided upon Justin Timberlake’s Can’t Stop the Feeling, based upon its popularity with our students (and staff)!

We started recording at the beginning of January, laying down the basic arrangement parts (with the help of Year 6 School of Rock members recording the piano, drums and bass pieces). After this, we spent a month listening to the original track and doing our best to recreate the production by adding textures (recording layers of percussion, Synth lines, hand claps and clicks). The JSV Ukulele Band recorded the bridge and the last instrumental tracks to be laid down were the JSV Samba band at the beginning of April.

Vocal recordings took place at all 4 school sites, with 1 recording session at Junior School Diamanthorst, 2 at Junior School Leidschenveen and 2 at Senior School Voorschoten. The Music teachers at each school were asked to organise and select staff and students (from F1 up to Year 9) to be involved (as well as singing lines themselves)! We wanted the video to reflect every facet of school life.

Filming for the video took place over 4 months at all 4 BSN sites, before we sat down to go through the mammoth task of putting all of the footage together (with so much great footage, this proved to be one of the most difficult parts of the process)!

In the end it took 4 months to record, mix and master the track (which ended up consisting of 133 instrumental and vocal recordings), and over 500 staff and students were involved in the recording and filming of the video! It truly captures the spirit and talent of the BSN!

Now that you know the back story, check out the BSN’s Can’t Stop the Feeling video again (or for the first time) and enjoy!

If you would like to learn more about our performing arts programme, you will find this link useful.