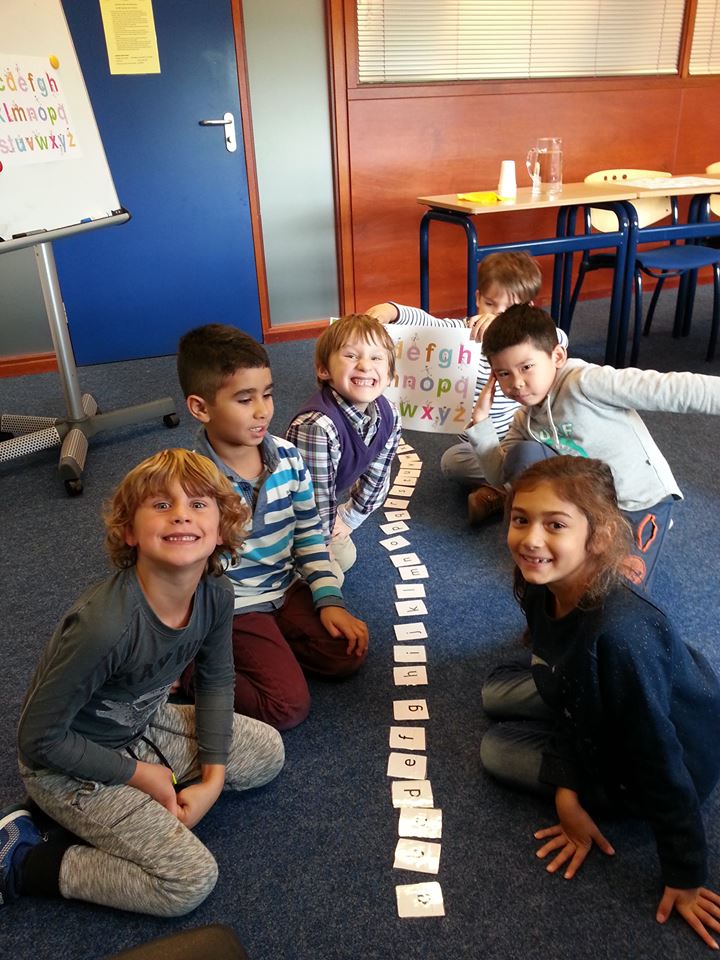 This year for the first time we welcomed 5 and 6 year old learners of English to the Language Centre, in our new after-school class called Young Starters. We have always run children’s programmes here at the Language Centre, but for a variety of reasons we only worked with age 7 and up until last year.

So it was quite nerve-wracking last September, wondering who would register into the new group, how many, and how it would be for all of us to work with students of a younger age, who have some different learning and development needs to older children!  Our system at the Language Centre works so that students register for as many lessons as they want, from a minimum of four weeks to a maximum of a full year, so our groups never stay the same and children can come and go through the year. This means that nothing is ever certain, especially with a brand new group!

Our teacher, Caroline, is an incredibly welcoming and talented teacher, however, and on the first day – with her small starting group of four  – she put them all at their ease. The students got to know each other and her, and began to feel safe with the environment and with us.

It is very a big thing to be 5 and in a new environment, speaking a new language, surrounded by unfamiliar faces and in an after-school class after a long day of learning in their Dutch primary schools as well! The aim of Young Starters was to put the children at their ease, and to make English something fun and safe to explore together, led ably by Caroline and later by her assistant Raquel.

Unlike in our other Young Learner classes, we also wanted to make space for their home languages as well as English, and we encouraged sharing of their language backgrounds in our class – from Mandarin to Russian and beyond, they shared with each other some of their mother tongue as well as the new words in English! This was mostly about feeling safe and confident knowing they could communicate in their own way when they needed to, but also about English not being ‘in competition’ with their Mother Tongue but in collaboration with it. We are big believers in that at the Language Centre!

Here they are playing a getting-to-know-you game outdoors in the JSL playground, what feels like a long time ago, back in September 2016: 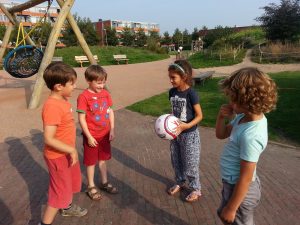 Since then, the group has grown. Students have kept re-registering and new ones have joined, so we now have a thriving and happy set of 12 with us now, most of whom are ready to go forward next year into a new stage of learning with us at the Language Centre.

To end their year, students have put together a book of their drawings and made a class story called Rapunzel’s Treasure, with a few words in their home languages included (thank you parents for helping us with preparation for this book!) You can see Spiderman hard at his work here rescuing some treasure from burning lava, finding time to exclaim in Russian and Turkish as well: 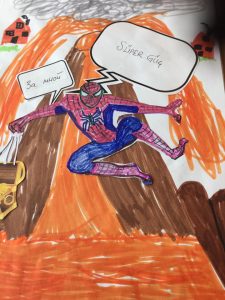 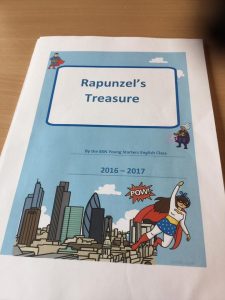 We are going to publish this book and give parents a copy in the last class of this year, which is next week.

We hope our youngest learners have had a fantastic time with us this year. It is really heartening to see them learning and working together each week, totally at ease in their classroom and with Caroline and Raquel, and most importantly of all talking more and more in English!

Here are some of the current group playing and learning one sunny afternoon last month: 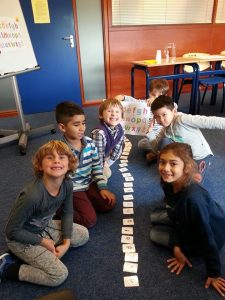 What a lovely year for them, and for us!