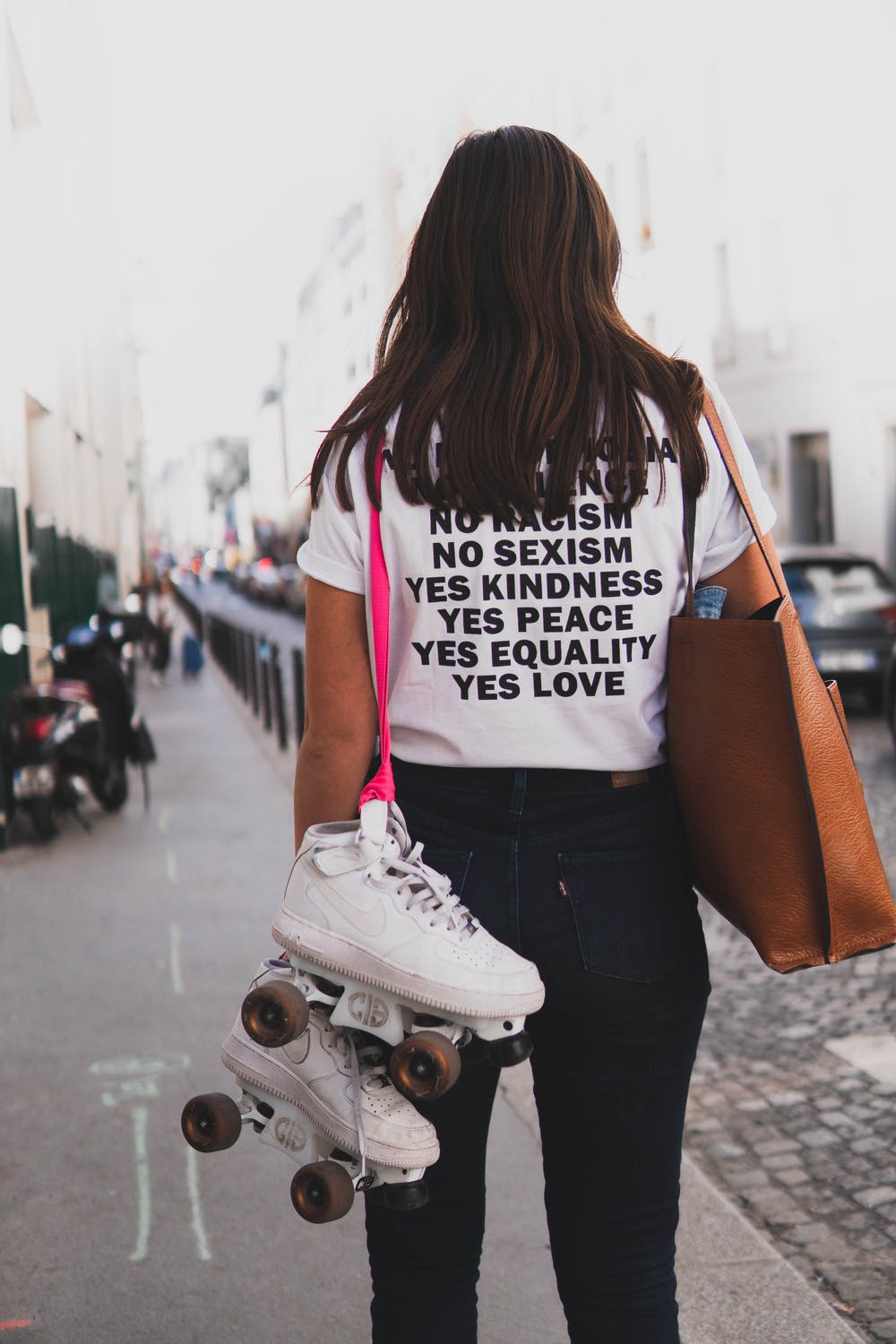 Finding Equality in the midst of Sexual Harassment

Finding Equality in the midst of Sexual Harassment

Our society around the world is changing as many new and different views and ideas are being accepted and adopted by the majority of people surrounding us. This is partly due to movements, spreading awareness of problems; in particular those concerning the acceptance of people who are seen as ‘different’ or those who have encountered abuse. The problems that have been arising throughout the last couple of years are not necessarily new; rather ongoing attitudes that have not yet been resolved.

Sexual assault is one of the ongoing problems that has impacted many lives. DoSomething.org claims that 20% of women will be sexually assaulted while in college, while only 4% of men. As a higher majority of women fall victim to the crime, it is stereotypical to forget that many men have also been affected. Once assaulted, it can injure the victim both mentally, affecting how they view themselves, and physically, for example with life-changing consequences such as unwanted pregnancies. The traumatic experience is often ignored due to fear of any consequences or embarrassment. This is the largest factor that must change; if there are no consequences for the person committing the act they are likely to repeat and the victim is isolated in their own trauma.

Statistics from the Rape, Abuse and Incest National Network (RAINN) show that only 9% of rapists get prosecuted, only 3% of rapists will spend a day in prison and only 5% of cases lead to a felony conviction. This means that 97% of rapists walk free.

Inequality in the workplace is also becoming something we are being made more aware of as many women are now questioning their pay and comparing it to male peers. For years the gender pay gap has remained as if it has been accepted or justified; however, massive efforts are now taking place to try and reduce it. Research from USC School for Communication and Journalism showed that from 2007-2016 only 4% of the top grossing directors were female and just 7% were women of colour. This is based on the film industry, however, similar statistics are present in most jobs.

One of the many campaigns fighting against sexual violence and harassment is the #MeToo movement, that was founded ten years ago by Tarana Burke in the USA but has become a viral trend in the last two years. The focus of this movement is to encourage people to speak up and report sexual assault, whether it is in the workplace or at home. Its main target was initially focused on woman of colour, who were from poorer communities. However, it has grown and expanded as a larger number of people have become aware of the importance to stand up and voice their experience of sexual assault. Although it is still dominated by women speaking out, #MeToo covers any sexual act committed without consent, from unwanted comments, to rape. Celebrities have also been speaking out about their experiences in the workplace and home, which has helped to raise the curtain that had been obscuring how great the problem is. As a result, this has helped make people feel more safe in sharing their experiences on social media sites such as Twitter. The founder Tarana realized a statement and one of her questions for us was:

“When you hear #MeToo, will you stand up to say #NoMore?”

On January 1st 2018 the ‘Time’s Up’ movement was created after women in the performing arts industry spoke out about ongoing sexual harassment and, more specifically, assault by powerful men in the profession. The goal is to communicate that everyone should be treated equally in the workplace and that sexual harassment and assault must end. This is backed up by more than 300 women from the Hollywood industry, along with many others who have supported the movement. Ultimately, the movement wants equality: an environment where women, people of colour, members of the LGBTQ+ community, all have equal chances to participate and are paid fairly for their work. That means paid equally to their, predominantly male, peers. The movement claims to:

“Partner with leading advocates for equality and safety to improve laws, employment agreements, and corporate policies”

Similar to the #MeToo movement, Time’s Up hopes to help people stand up against harassment, targeting cases specifically linked to the work place. By attracting large amounts of attention on the media, it gives strength to ordinary victims to speak up  and highlights to abusers that fewer people are afraid and are no longer hiding. Studies by Berdahl JL, from the university of Toronto, have also shown that there is a higher chance of assault for a person in a job mainly dominated by the opposite gender. Catt Sadler, one of the influential leaders of Time’s Up, left her job as a news anchor after finding out that her male coworker earned nearly double her salary; her story has now been used in the Time”s Up movement to help encourage women in a similar position to stand up for their rights.

The Influence of the Media

The #MeToo and Time’s Up movements have both helped bring awareness of harassment to the foreground in the past few months. This has been done mainly through celebrities and advertisements, such as through the social media and at public events that are broadcasted all over the world. These advertisements then cause a multiplier effect on society as most of the younger generation use technology to read and hear news online.

Darkness at this year’s Golden Globes

The Golden Globes of 2018 took place on the 7th of January, where many well-known stars dressed in all black to support the Time’s Up movement. This gesture, which most actors and actresses took part in, was to signify solidarity and equality between every gender, but especially for women. For example, Katherine Langford, the leading actress of the popular “13 Reasons Why”, was interviewed on the evening of the Golden Globes event where she said:

“What we’re doing is supporting work that’s already been done by so many people for such a long period of time, but tonight is special for the Time’s Up movement, which is supporting equality not just for women but also for men and all non-binary people across every industry.”

Another leading supporter from the acting industry is actress Emma Watson, who was also part of the all black event at the Globes, and constantly tweets about the work she does to help stop harassment in the work place. On the 2nd of January 2018 Emma tweeted :

“I stand with women across every industry to say #TIMESUP on abuse, harassment, marginalization and underrepresentation.”

Not only does Emma frequently post on her multiple platforms about the movement, she also had “Time’s Up” tattooed on her forearm which she flaunted;  proving she is not shy about showing her support.

The #MeToo movement has also had much support from famous actors and actresses, such as Kerry Washington. She also wore all black at the Globes. On the 7th of January she tweeted :

“We are a woman led campaign but we are standing for ALL marginalized people. STAND WITH US.”

The support from these celebrities has raised the awareness majorly over the past few months. The #MeToo movement was created over 10 years ago, and finally people all over the world are starting to take action and become aware thanks to the promotions from these celebrities all over the media. Through using technology to raise awareness, there are now many more younger people,  who are aware about what is wrong in the work place, which is especially crucial for young girls who will be in these work places later in their lives. It is important for everyone to know that harassment is not something anyone should have to accept, and that there is no need to be afraid to speak up. It can’t take another ten years for people to take action against sexual harassment and inequality in the work place.

Do you know what the #MeToo and Time’s Up movement is?

11/21 students in the class said they did not know. I interviewed Amelia, a student from the British School in the Netherlands (BSN), to ask her about this issue. She did not know what the specific hashtags #MeToo and #TimesUp were; however, she was aware of the issue that they stand for regarding sexual harassment and equality in the workplace.

Do you agree with the Time’s Up/ Me Too movement?

“I think it’s good especially as it has gone viral as it raises awareness; it allows those who feel embarrassed to speak up about these situations and makes them aware that it’s not acceptable.”

How do you think the school raises awareness to this issue and educates people about this?

“By having many assemblies and, more specifically, we recently had Equality Week with one day based on gender inequality which I though was very good as the whole school was involved.”

As less than 50% of the people interviewed knew what the movements were,`

What do you think people can do to further bring awareness to Me Too and Time’s Up movement, and anything to do with harassment in the workplace?

“I did know that harassment in the workplace was a problem, I just didn’t know about the movements. So I feel the 50% isn’t too big of an issue, as they may have only not known about the movements rather than the issue behind the movement. But to make awareness higher, assemblies and posters could be set up.”

What is your opinion on Equality Week?

“I think it’s good and is helping to make our school a more open environment where we are already put in an equal mindset.”

The school is an environment different from a workplace in many ways as it is not an occupation chosen. This does not mean that the movements are not relatable, rather it takes place in a different situation as it is a less professional environment with all ages of maturity.

This year is the second time Equality Week has occurred, and there have been five themed days. Thursday was water wildlife and ecosystem to do with ocean pollution, Friday was LGBT day, Monday was health day Tuesday was gender equality day and Wednesday was international day. These are great to celebrate differences and to show that everyone is equal, especially in a school with so many people from different cultures and nationalities.

We are looking forward to equality week next year with new themes such as race equality and more. Hopefully within the near future the issues of sexual harassment and inequality in the workplace will be addressed more in the hope for worldwide change.

Written by: Maisie, Sophie and Cleo