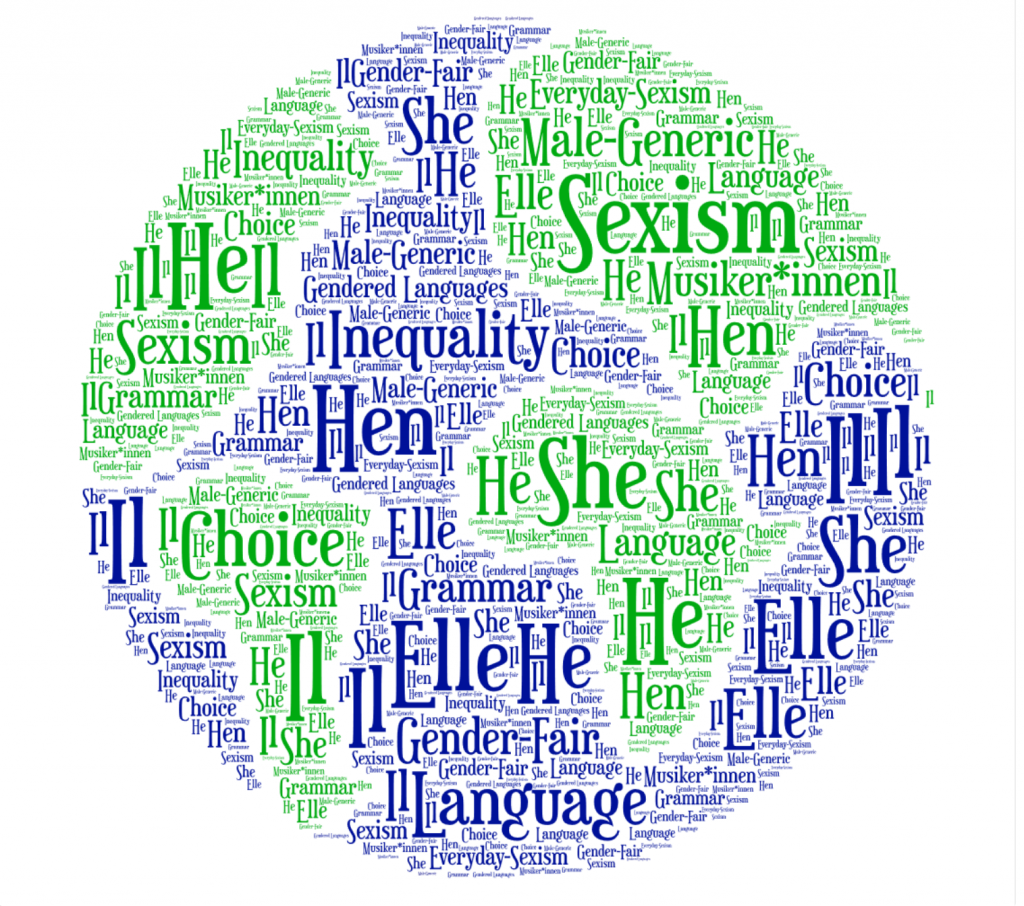 Sexism in Languages: How we are ignoring everyday Inequality

In times where Gender Equality and everyday sexism are heated debate topics in the media, one massive example of sexism is frequently overlooked: Language.

In the 21st Century, equality is one of the most heated debate topics. Governments and Movements have put much work into ensuring equality between both genders, going as far as to introduce quotas and positive discrimination to ensure that everyone is equal. However, nowadays, when so many steps are being taken to ensure equality, it is quite strange that one blinding example of everyday sexism has not become widely noticed yet. Language. One of the things everyone in the world uses every day, every hour, every minute, that subconsciously enforces stereotypes and inequality. How has this not been noticed yet? We continuously avoid a topic that should have been solved long ago. Why?

The truth is that even in the modern day, language still holds countless examples of sexism and normalizes them, encouraging gender stereotypes and negative mindsets towards the other gender. Whether in gendered or non-gendered languages, or simply common phrases that are used all the time, sexism in linguistics remains a massive problem.

Common, according to studies even more harmful, examples of sexism in languages exist not only in English, but in foreign languages, in the form of male generic terms used to refer to both genders. In languages with structured gender, like Italian or German, it is normal to refer to both men and women, or to persons whose gender is irrelevant or unknown with masculine nouns. For example, in French, the female pronoun is Elle and the male is Il. When it is a group of women, they are described as Elles, but as soon as a single male enters this group the pronoun becomes male plural, Ils. How is this fair? In languages without structured gender, like English, generic forms also use the masculine pronoun, for example him and his can be used either in a male-specific or in a generic sense, whilst she and her are only used to refer to females. There is a large problem with this structure. Studies have proven that it clearly fails to be a neutral generic, as the masculine generic does not depict men and women as equal humans, making women feel like a subcategory of men, which strengthens sexist mindsets and is clearly not the case. A study made in 2005 about the cognitive effects of masculine generics in German asked participants to answer questions such as “Who is your favorite musician?” showed that people, when asked a question with a masculine generic, tended to answer with predominantly men. When gender-fair forms such as Musiker (masc.)/ Musikerinnen (fem.) were used, more women were mentioned. This clearly displays how masculine generics actively discriminate against women and do not represent them fairly.

In fact there are solutions for these problems. A few years ago, Sweden added a gender neutral pronoun hen into its language to refer to people whose gender are unknown or those who do not identify as a man or a woman. At first, the change was received negatively by the majority of the public, but nowadays studies show the pronoun is more frequently used and accepted by the Swedish public. Other studies have found there is a positive correlation between countries where gender-neutral and genderless languages are spoken and gender equality.

However, not everyone is willing to adopt these solutions, protesting against changes to the grammar of the language. For example, changing the languages would equate to a massive overhaul in education, grammar and books. Is it worth the trouble? In German, several people proposed that one could use a star to put male and female words into one, for example, Musiker*innen. However, this was met with disagreement and controversy, and the debate quickly shut down. Could you, especially in languages such as French or Spanish, which are gendered and completely depend on this gender system, change what is to some something so small? Especially since still a large percentage of people do not believe this language is actually a problem, and that changing a language would do nothing to improve the view of women in society. For them, changing the grammatical structure of their language would be a waste of money and time that could be better spent elsewhere.

Countless examples of inequality in languages are found in English, not just in the form of structure, but phrases and words. English features many phrases that are frequently used that enforce gender stereotypes. A prominent example of such is the phrase “Man up.” Used to tell people to be brave or stop being cowardly or hesitant, often to pressure them to do something they do not want to do. The keyword in this that highlights the sexism is “Man”. Not women up, but man up, associating the instance of bravery with the common stereotype of the strong, brave male, enforcing this stereotype without the speaker realizing it themselves. Going almost hand in hand with this is the common association of screaming with girls. “You scream like such a girl” or any variant of the former is commonly used to poke fun at someone for being scared. This connects the female gender with fear or being cowardly, subconsciously strengthening the stereotype of women being the weaker, “gentler” sex.

There are countless examples of such phrases littered throughout the English language, some so subtle one might not notice it, or some so glaringly obvious that one wonders why this issue has not been largely addressed until now. All of these subconsciously enforce sexism against both genders and strengthen harmful stereotypes. Yet how have we ignored this until now?

The main problem is that there is no large solution to not using these phrases. Some, so commonly used that they are simply part of our language and used automatically without thinking. People cannot simply erase phrases like these from our memory. Another major problem is that the large majority of people do not see the inequality spread by sexist phrases or lack the will to change such. Many cannot be bothered to remove a daily example of inequality, perhaps in their opinion, minimal, from their vocabulary. Some might not even find an issue with it at all, and choose to continue speaking so. Who are we to tell them no? It is freedom of speech. Especially with more subtle examples, can the government prescribe and ban language that is even in the slightest degree sexist? And the answer is no.

An easy solution to this issue is not yet here, and until then, we need to rely on the people to change their vocabulary, to change the way they speak to erase these everyday examples. Whilst it might take work, some thought before speech, it is the only viable solution. For small instances like these, it is in the hands of the people to start change, not the government.

It is clear that this debate is not one sided, and features many viewpoints and perspectives, each different and unique. Similar to many controversial topics, there are no clear solutions or paths to use to solve what is to some a huge obstacle in the road to equality and for others normality and not an issue at all. There is no answer, and so the debate continues. Despite evidence for the ideology that language actively supports sexist ideas and stereotypes, this urgent issue is not touched upon. Especially in times where #MeToo and female empowerment are stronger than ever, why is a simple, much more common example of everyday sexism being ignored by the mainstream media? There is potential for positive change, and a solution to a problem that subconsciously damages the values we stand for. For success in such an undertaking, sexism in linguistics needs attention. Because in the end, it is the actions of the majority that matter, and that will bring change.