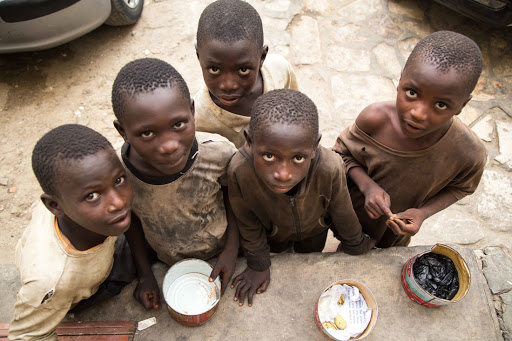 Every year, when I go to Senegal I feel pitiful when I see the Talibés on the streets, especially when they walk up to the cars and beg for money. Sometimes, my grandma either gives them food to eat, rice, sugar and eggs. I find it sad that a lot of these Talibés were sent away by their parents and I cannot imagine how bad they feel. In most cases, this is modern day slavery against thousands of small children. Parents and governments must put an end to it and make sure city children are treated well, their rights and well-being are, respected in any school they go to.
Talibé is the Arabic word for pupil. Talibés in Senegal are very young children sent by their parents to learn the Quran at Madrasas, meaning schools also called daaras. They are taught by a Marabout (teacher). Most Talibés leave their home to live and study at a daara for several years. Depending on the daaras and the parents, the kids can go to visit their families at the end of every month or during holidays.

In Senegal, Talibés are also seen as ‘enfants de la rue’, which means children of the streets. This is because they spend lots of time in the streets, begging for food, money, and goods people may give them. Sometimes, parents come in and give the children food like rice, sugar.
Even though daaras are teaching children about the Quran, which is a good thing, they have been getting a lot of criticism because of their harsh and often abusive teaching ways and the living conditions they imposed on the children. There are many examples of abuses caused by the tasks and amount of money and goods Talibés are asked to bring every day to the Marabout, by from begging in the streets. In one case, a teacher beat a 12-year old boy to death, because he had failed to collect the sum of money he was asked to have by the end of the day. This is why many Talibés sometime steal so that they can give their teacher what he asked to bring every day.

These children are usually sent to daara because their parents are poor and think that the daara is the best place for them to learn the Quran and also get a good education. It is basically a boarding school but some boys go to daara during the holidays and go to a normal school the rest of the time.