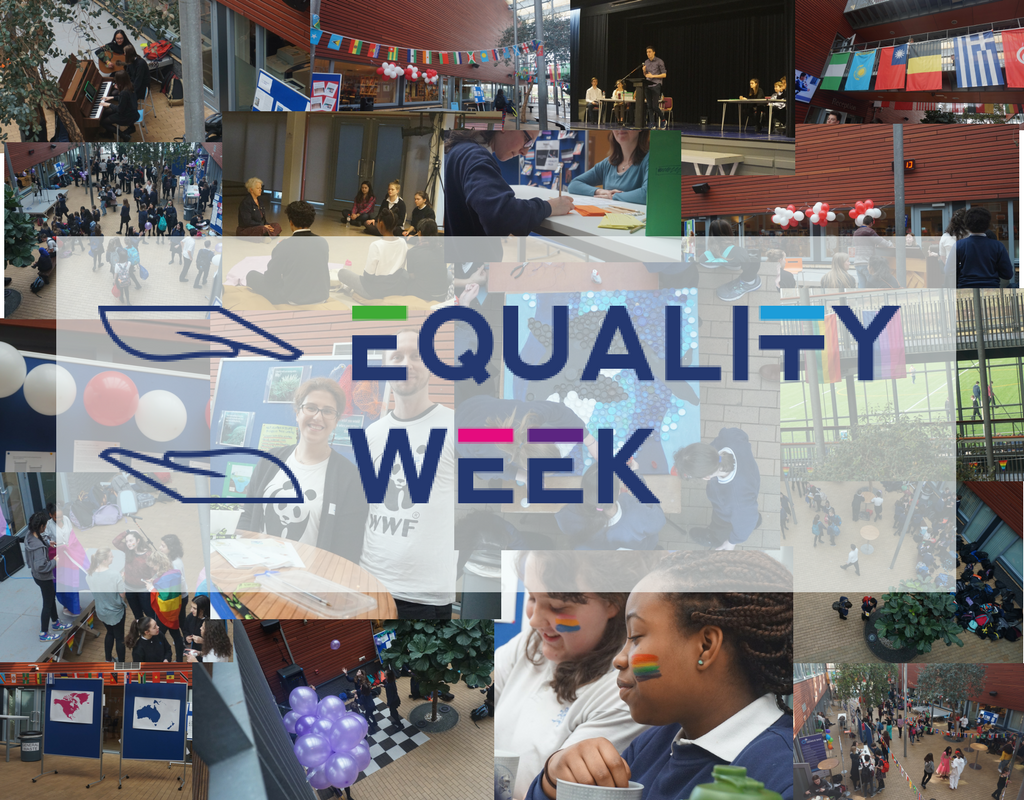 Equality Week. What is Equality Week? Equality Week is a special week where we recognise the inequalities, celebrate the differences around the world and try to raise awareness within the school community. During Equality Week we do lots of fun activities organised by the student-led Equality Committee. We are proud to say that this is our second Equality Week celebration. Everyone at the BSN takes part in Equality week, showing how open and diverse we are.

Please find below the  daily musings of two Year 8 students as they celebrated this year’s theme: equality through respect.

There weren’t many activities today as it was just the first day. We had house assemblies: Gouda with Amsterdam and Delft with Leiden. The assemblies were about the problems with giving people labels and a video from TedX was presented. Voke, a sixth form student at the BSN, was the speaker and her speech was not about what is wrong with labels. No. She spoke about what is wrong with the connotations behind these labels.  Tomorrow, I can tell you, is going to be more action packed than today…

Today is Sustainability Day. There were a lot of awesome activities going on at lunchtime all about how to take care of the environment, our environment. Two events were about recycling. In the first one you could turn bottle caps into astonishing artwork and another your could turn beach ‘trash’ into stylish bracelets. Another two focused on how animals in the oceans are consuming harmful materials, such as plastics. This linked to yet another stall about how a great deal of fish are becoming extinct, unbeknown to us.

The last two stalls allowed you to sign up to an environment-related pact. The first for Meat-free Mondays for four weeks to reduce the amount of meat we eat. Lastly, and the most shocking in my opinion, was about the mistreatment and killing of dolphins, allowing you to sign petition against this horrible act! Yes, people are killing dolphins. Across Asia, there are groups brutally killing dolphins, both for meat and for fun. A metal rod is pierced into their respiratory system and they are left to bleed to death, a process that leaves the dolphins dying painfully for 5-6 hours. Although the people buying the dolphin meat don’t know it is dolphin and think it’s just fish, this is still an atrocious act. We also learnt that dolphins are being maltreated in live-action shows. They are not being given proper care for their wounds and not being looked after by specialists. Students from our school have signed a petition provided by Greenpeace, telling the government that we will accept this no longer! All in all, today was a productive, creative day where students became more aware of the extraordinary, but endangered, environment that we must take care of.

Today is LGBT day. This is day to celebrate everyone and question the restricted view which is accepted as ‘normal’. Flags were put up in the atrium and a face painting stall was put up to show that we support people of all sexualities, wherever and whoever they are. It was amazing when you look around at the celebration.

Just a few years ago, it was still illegal in quite a few countries to be anything other than heterosexual.  You could be put in jail or even executed! This is no longer the case in the majority of countries. However, countries like Sudan, Iran, Saudi Arabia, Qatar, UAE, Yemen and more are places where being LGBT is still punishable.

Celebrating LGBT is an amazing thing to do. It makes people see that everyone is the same, no matter what gender they are or what gender they are attracted to. When interviewed about today’s  celebrations, one Year 8 student said the following: ‘It is quite important to me because this is what makes our world amazing and diverse.’

Today is Mental and Physical Health day. There were different stalls up today. One was a stall where you could anonymously share either your experiences when it comes to mental and physical health or what helps you through your problems. You could write these thoughts on slips and hand them in anonymously, giving people a chance to share ideas and support each other. Additionally, a ‘Treat Yourself’ stall was put up and you could get your nails painted in the colour purple because that was the colour scheme for today. Finally, the Mindlessness activity. Participants sat in a circle on cushions in the Drama studio in complete silence, allowing participants to relax and get in touch with their minds. All in all, today taught everyone about the importance of being healthy, not only in the body but also in the mind.

Today we celebrated gender equality. There were no stalls set up today but there were thought-provoking posters and a debate about the role of positive discrimination.Though I, personally, did not view this debate some pictures were taken by my co-worker, Marie (who took basically all the photos and videos for this article), and she can confirm that the proposition won. To me, positive discrimination is an interesting and relevant topic which is why I am pleased it was debated.

Today was International Day, the first in a while, at the Senior School. Walking around school and seeing all the different nationalities, different outfits and different colours was just marvellous. In the atrium there were large and small flags from all the countries of the students attending our school. I have to say, a rush of pride washed over me when I saw my country’s flag. Snacks from different countries and students were shared at Tutor Time. I don’t know about the other classes but my class had a blast eating the various refreshments that we already knew or had never even tried. At lunchtime, there was a bake sale for Xenia, led by year eights. Also, amazing singers sang as entertainment. Finally, there was a costume competition for those who had the most epic outfits to represent their country. This competition was won by Saudi Arabia, who’s representative went all out. International Day was a major success, which, hopefully, the school will carry on. Being able to showcase your country is a remarkably significant thing to do in an International School. What a great end to Equality week, right?

All in all, Equality Week was an amazing, thought-provoking, adventurous week. It was filled with lots of fun activities, things to learn from and new experiences. Equality week was the perfect week to present new ideas about how you can solve inequalities around the world. It was also great because we got to try different foods from different countries, commit to new challenges (like meat free Mondays) and dance in the disco to celebrate LGBT.

Although this was a great week, remember equality can – and should be – celebrated by anyone, anywhere and it doesn’t have to be squashed into just one week! Click the links below to prolong Equality to an entire year.

A quotation from one of the many people that made Equality Week possible – ‘What made me start was three students wanting to make a change’.

Save Dolphins with WWF