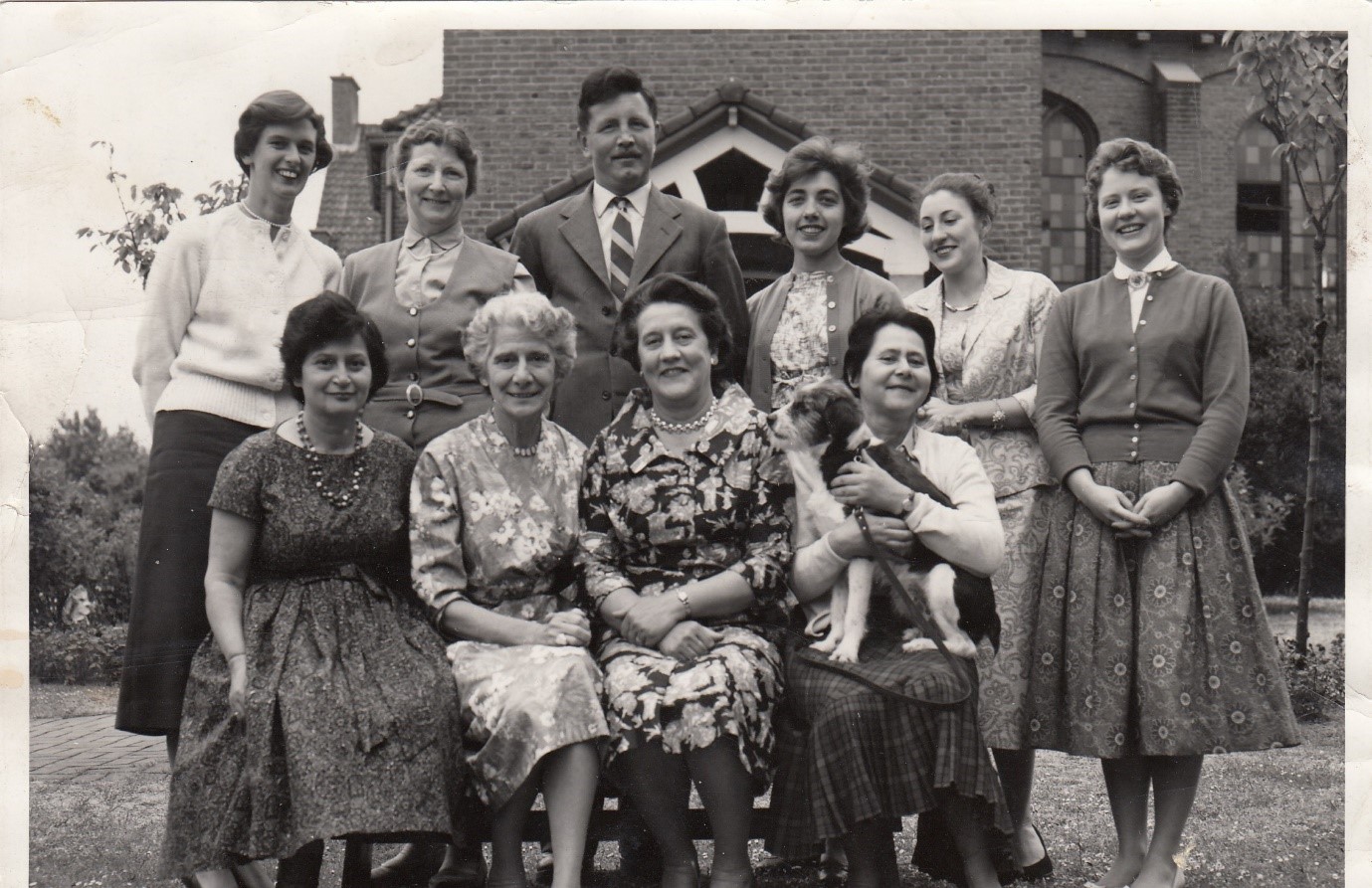 A New Home and some Important Visitors

It is the spring of 1956 and the two Co-principals of the English School of The Hague, Nancy Macdona and Peg Donaldson, are worried. They have just withdrawn their school from the International School project, in which the Brits, the Americans, the French and the Germans were to be united under overall Dutch management. They have nearly 100 pupils of all ages and nearly a dozen staff, but they now have no building. And in September a new school year will be starting.

Now we go back a few years. It is 3rd March 1945
and a cloudy night. Some RAF bombers accidentally bomb the Bezuidenhout area of
The Hague, a terrible blunder, and as well as causing a considerable loss of civilian
life  also, a bitter irony, damage the
British church beyond repair.

Why not the Church hall?

Forward to 21st June 1951 and a new Anglican Church is opened on the Ary van der Spuystraat. It is a church with which both Nancy and Peg become very familiar and the vicar, the Rev. Arthur Austen, is a personal friend.  It is also a church which has a fair sized church-hall – which appears to be empty for much of the week.  Hm.? The ladies approach the vicar with a request. Would it be possible, do you think?… just temporarily of course…real emergency…ever so grateful.  And the Reverend Austen agrees that for a token rent the Co-Principals can move their charges into the hall in September while looking for somewhere more suitable. A folding partition divides the hall into two and there are two other small side–rooms. And that is where the English School, with ever growing numbers, stays for the next three years.

How on earth they managed, goodness only knows. But they did manage and pupils kept arriving. There were also one or two events of considerable significance that occurred during the church-hall period. Most important of these from a long term point of view was that in 1958 Peg Donaldson (known behind her back as ‘ the fighter’) finally succeeded in persuading the Ministry of Education in the UK to recognise the English School of The Hague for pension purposes. This may not sound like much but it meant that, at last, properly qualified teachers could be recruited from home and continue paying into the UK superannuation scheme.  It meant that rather than having to look around locally for ladies who happened to be available for a year or two, or who had private means, the school could now offer job security and careers prospects. Without this safeguarding of pension rights there could not really have been any further development of the English School even if space had permitted.

Two of the new teachers to be attracted to the school were its first male member of staff (27 years after the school’s foundation), a certain Graham Flowers, and a freshly qualified young female teacher, Maureen Carroll. Graham moved on after a couple of years but Maureen stayed to become, many years later, a highly successful and popular headteacher of the Junior School. She was awarded an MBE for her services to education and as Maureen Jonker-Carroll, now in her eighties, is still a member of the School Association.

Another event, not of such long-term significance but a tremendous morale booster to the school at such a difficult time also occurred in 1958. In March of that year H.M. Queen Elizabeth and H.R.H. the Duke of Edinburgh paid their first state visit to The Netherlands. In fact it was the first state visit ever paid by a reigning British monarch to The Netherlands. So it was a grand and glittering affair with the couple arriving on the royal yacht Britannia and various banquets with a dizzy fortune in famous jewellery on display. The old Pathé newsreels certainly make for interesting viewing. For me one of the most interesting and, in a way, saddening things about looking at the photos taken during their visit to the church-hall (and at other venues) is that you can see the British royal couple plus Queen Juliana, Prince Bernhard, Princess Beatrix, Princess Irene and the British Foreign Secretary, Selwyn Lloyd, all walking around and chatting to members of flag-waving crowds without any security guards. A different and in some ways more innocent world.

Stories from the Archives, written by Mike Weston.