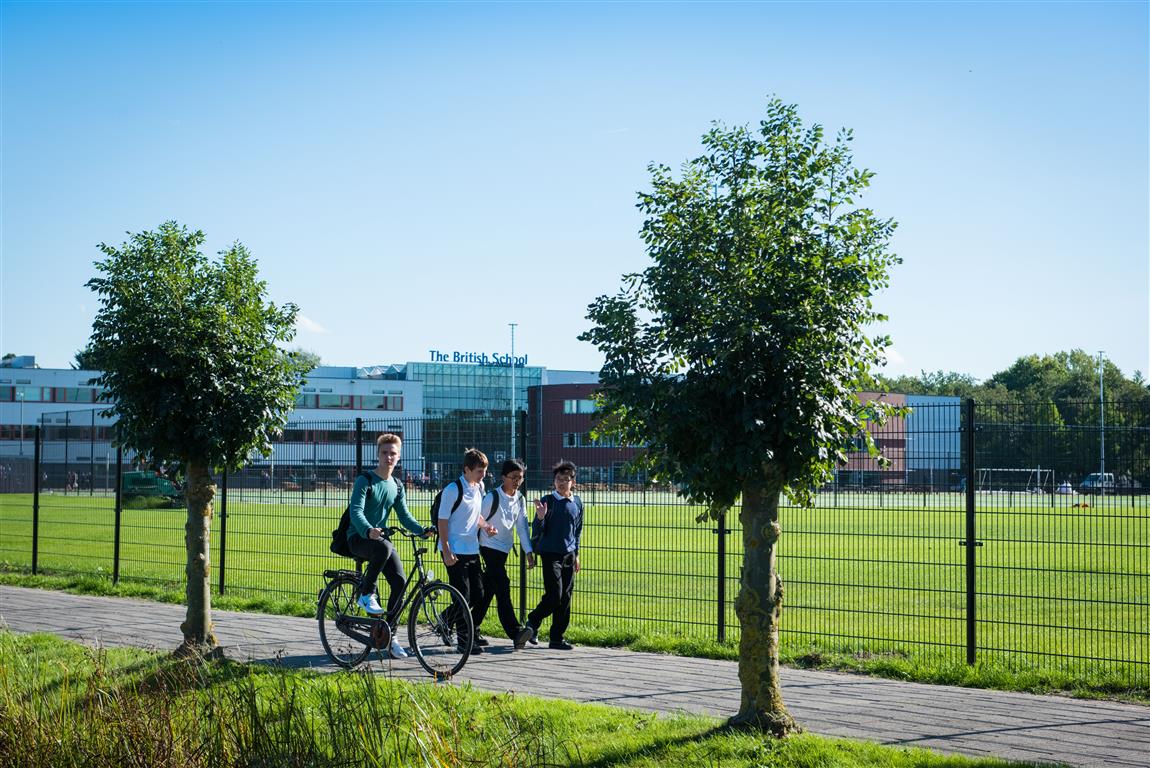 In 1972, when I first arrived in Holland, the so-called English School of The Hague was in three divisions – Junior, Middle and Senior – housed in various premises scattered around Scheveningen.

During the early 1970s, partly as a result of the United Kingdom having joined the EU, there was an explosion in school numbers, from 500 to nearly 1000, and it became clear that the old buildings could no longer cope. The decision was therefore taken to buy 5 acres of land out in Voorschoten and build a new secondary school in which the old Middle and Senior Divisions would merge. The gemeente Voorschoten were delighted. They had such a plot available, and a growing international school was looked on as quite a catch. (The school had changed its name to the British School in The Netherlands a few months earlier to reflect its enhanced status). On 15th October 1977 several coachloads of teachers, friends of the school and VIPs, in an atmosphere of great excitement and high morale, were bussed out to the site for the laying of the Foundation Stone. We really did feel we had achieved something.

During 1978 the Middle and Senior Divisions looked on from their old premises, familiar surroundings, well-loved but no longer fit for purpose, to see how developments were coming along up the road in Voorschoten.  And indeed progress was rapid. It was hoped initially that the move might take place around the end of the year; however, in part due to the sudden resignation of the school Principal, Mr Neil Buckley, through ill health, it was decided to postpone the move slightly until the end of the Spring Term 1979. We would be starting the Summer Term there on 23rd April and the official opening by HRH the Duke of Gloucester would take place on Wednesday 9th May.

Then something terrible happened. Four weeks earlier, on the 22nd March, the British Ambassador, Sir Richard Sykes, who had been deeply involved with the whole undertaking and who was due, that very morning, to chair a meeting to discuss procedure at the formal opening of the school, was shot dead outside the embassy in the Lange Voorhout. The I.R.A. claimed responsibility for the murder but no one was ever caught. I have written all about this in my blog on 13th September 2018 so will not enter into detail now. Suffice to say that the wave of shock that went through the BSN community made tremors in Voorschoten as well. There was a very real concern that a high profile event like the opening of an international school, with royalty and sundry VIPs in attendance, would be an obvious target for terrorists. The newspapers were full of it.

So the three weeks between the beginning of the new school term, when we moved in, and the ‘big day’, the official opening, were an emotionally charged time:  great buoyancy and sense of purpose as we settled down to work in the wonderful new surroundings that we had dreamt about for so long; determination to make the merger of the two old Divisions a success and, of course, curiosity about our new colleagues; deep and widely-felt concern about security issues; but above all elation and anticipation as the royal visit drew closer. I am an ardent royalist myself but even amongst those whose feelings are less enthusiastic, a visit to the school by ‘royals’ never fails to generate an atmosphere of great excitement and anticipation, a tangible ‘buzz’ as the day’s routine is gone over again and again, the students rehearsed, the buildings made spotless, the musical items polished and fine-tuned, the gymnastics displays perfected, the laboratory experiments set up, the cookery demonstrations at their appetising best. And so on. The BSN aiming to be at its most impressive.  I have seen it on numerous occasions now, and it always makes me feel good.

The big day and a royal visit

May 1979, was blessed with fine, sunny weather. At 11.00 in the morning we were all in our positions. I was near the entrance to the buildings so had an excellent view as the royal party arrived. First to sweep into view were the police outriders who swung round from the Generaal Spoorlaan and headed through the open gates. Then came the sleek, black embassy cars, the bodyguards moving swiftly round to open the passenger doors, their royal highnesses the Duke and Duchess of Gloucester, stepping out, the welcoming party, the movement into the foyer and from there to the hall. After the Wilhelmus and God Save the Queen, Mr R. Hervey, the British Chargé d’Affaires (a new ambassador had not yet been appointed), invited the Duke of Gloucester to address the assembled school and guests and then to unveil a commemorative plaque. The Acting Headmaster, Brian Davidson, replied to the address, there was a musical interlude composed by the Director of Music, the delightful Gwilym Lewis, entitled Britannia Waives the
Rules, and then the tour of the school began.

At 12.15 it was all over. Lots of flag-waving and cheers from the assembled students around the school gates and the sight of the procession of cars and motor bikes heading off en route back to the embassy. Stand at ease. A mixture of anti-climax and relief. Nothing had gone wrong. Back to work tomorrow.

An exciting journey is just beginning..

And in a couple of weeks’ time, on Thursday 9th May 2019, that will all be forty years ago. Good Heavens! I remember it so well. In particular, I remember the tremendous feeling of optimism, elation and potential that I mentioned before. We had been working for years in two old houses, making the best of a bad job with limited facilities. Now we had, at last, got a brand new purpose-built school, thanks largely to our own efforts and hard work. What sort of school would it become in the future? An exciting journey was just beginning.